Affect vs. Effect: What's The Difference? 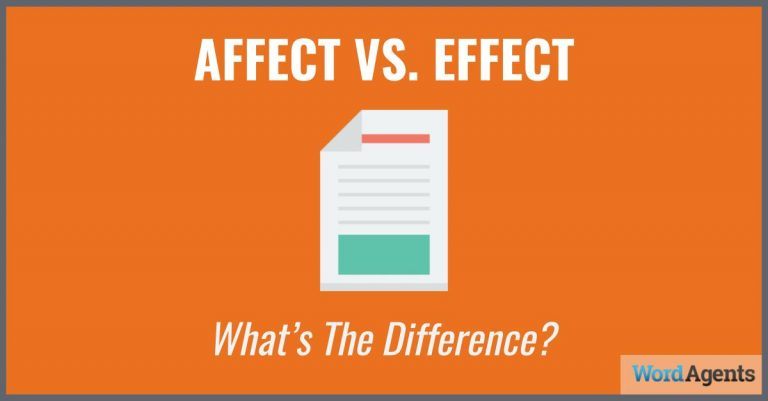 Affect and effect are both nouns and verbs, albeit, with some striking differences in usage. Similar pronunciation contributes to the confusion. In everyday writing, affect is typically used as a verb, whereas effect most often is a noun. But as with every rule, there are exceptions.

Knowing the Difference Between Affect and Effect

You can use both affect and effect as either a noun or verb. The most common usage is to use affect as a verb as in the sentence, “The weather affected our plans for a picnic.” You’ll find it helpful to keep its synonyms such as influence, change and alter in mind.

You’ll see effect more often as a noun as in the sentence, “The effect of the new medication was quick.” It describes the outcome, reaction or consequence that is the result of the action of the verb.

Confusion between the two words exists because they have both similar pronunciations and spellings. The same issues exist with other pairs of homophones like to, too and two.

Here's a fun video from Socratica that offers a great explanation on the topic:

How to Use Affect

As a verb, affect means to modify or sway. Think of weather affecting your mood, or sustainable development affecting the environment.

“To affect the quality of the day, that is the highest of arts.” ~ Henry David Thoreau

“The difficulty of literature is not to write, but to write what you mean; not to affect your reader, but to affect him precisely as you wish.” ~Robert Louis Stevenson

“Mr. John Dashwood had not the strong feelings of the rest of the family; but he was affected by a recommendation of such a nature at such a time, and he promised to do everything in his power to make them comfortable.” ~Jane Austen

Each example shows something acting upon something else as in influencing the reader. A good way to make sure you’re using it correctly is to look for this relationship between some factor and the thing that it alters.

How to Use Effect

Effect describes the end-product or conclusion of something. Look for the aftermath or summary of some action as in the effect of sunlight on your vitamin D levels.

“But the greatest effect in these miserable lessons is when my mother (thinking nobody is observing her) tries to give me the cue by the motion of her lips.” ~Charles Dickens

“It was as though the mention of their host and hostess had a curiously paralyzing effect upon the guests.” ~Agatha Christie

With each example, you can see that something happened. The word, effect, serves as an introduction to describe what occurred as a result.

Tips for Using Affect and Effect

One way to keep the two words straight is to consider each one’s place in the sequence of events. Affect is the process that influences an outcome. Effect speaks to what has happened in the aftermath. Remember, something has to affect another thing to have an effect as in A the action comes before B the consequence.

Exceptions to the Rule

What we’ve discussed so far are the common uses that you’re mostly like to see. However, both words have additional meanings that create exceptions.

WHEN AFFECT IS A NOUN

Affect as a noun occurs in technical writing making it easy to identify. It means an emotional response or feeling when used in psychology or psychiatry references.

“I view affect as the primary innate biological motivating mechanism, more urgent than drive, deprivation, and pleasure, and more urgent even than physical pain.” ~Silvan Tomkins

WHEN EFFECT IS A VERB

As a verb, effect is less common and may even sound awkward to some people. It’s used to describe the act of making something happen as in effecting a positive change.

“Hitherto, while gathering up the discourse of Mr. Brocklehurst and Miss Temple, I had not, at the same time, neglected precautions to secure my personal safety; which I thought would be effected, if I could only elude observation.” ~Charlotte Brontë

A good rule-of-thumb is to remember that a noun is more likely to be effect than affect. Affect has specialized uses as a noun that makes it uncommon except in technical references. The adage that A affects B to cause C can help you keep the pair straight.