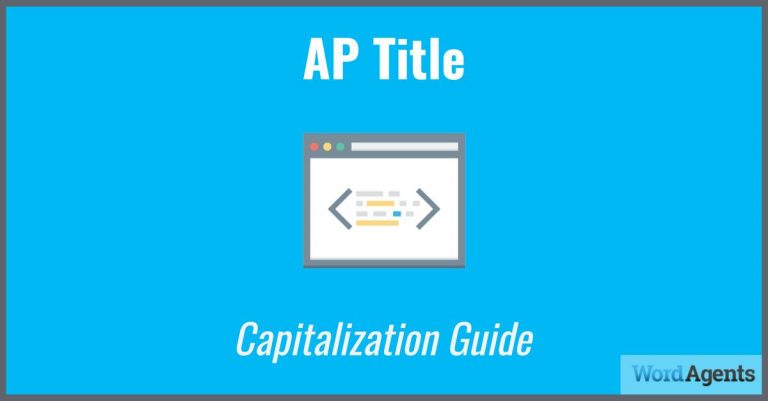 Correct capitalization is essential whether it’s a news article or a blog post or content on a website to make your writing look professional. But AP title capitalization is more complicated given the number of rules and the ever-increasing types of media. Let’s end the confusion with an overview of the correct way to capitalize titles.

You should always capitalize the first and last words of a title. You should also capitalize pronouns, verbs, adjectives and adverbs. That include the word is in all of its tenses. Add subordinate conjunctions like because to the list if they are over three letters long.

Rules for print media vary by the type. Correct capitalization includes the right way to use quotes with a title. If you’re referencing a book, the title belongs in quotes.

The same treatment applies to poems, songs and albums. It also includes speeches and TV programs. The exceptions are the Bible and reference collections like the World Book Encyclopedia. You shouldn’t put quotes around the titles of magazines or newspapers.

There are specific rules for the short words. However, you should not capitalize prepositions like the and articles like an. But, of course, there are always exceptions to the rule.

For publications that are known with an article like The Times, capitalize it too. The only time you wouldn’t is when you’re listing several similar publications like the Times and the Washington Post in a string.

Use of Sentence Case in Titles

You’ll notice that some titles follow what is known as sentence case which is common in newspaper article titles. The capitalization rules follow what you’d use in a sentence. You’ll see the first word capitalized and only the proper nouns within a title.

AP title capitalization rules apply to other cases besides media which may vary by region. Seasons, for example, are not capitalized. The exception is if it acts as a modifier.

Directions and regions also have their share of rules. If you’re referring to a compass direction, you needn’t capitalize it: The wind is coming from the west. The same thing applies when you’re referencing a region such as southern Wisconsin.

It’s different, of course, if the direction is part of the name such as Northern Ireland. Capitalization also applies when you’re writing about specific regions or well-known places.

You’ll likely find that capitalization follows common sense logic. If it’s important, a capital letter distinguishes it. But you shouldn’t use incorrect capitalization as a means to emphasize words.

AP title capitalization like the English language itself has its share of rules—and exceptions. The best approach is to be consistent. Follow the same guidelines throughout your writing. Remember that proper capitalization is the hallmark of good writing.