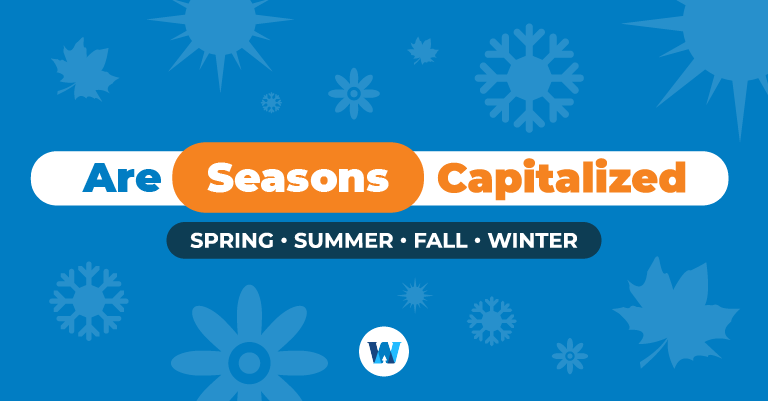 While word capitalization in the English language may seem rather simple at first glance, there are several tricky exceptions to the generally accepted rules. It's often difficult to know when to capitalize certain words, and exceptions can lead to confusion and embarrassing grammatical mistakes in your writing and sentences.

This is especially true when it comes to the seasons.

People tend to assume, for example, that since we capitalize both the days of the week and the months of the year, it would make sense to capitalize the seasons - right? Well, not exactly. When it comes to spring, summer, fall (or autumn), and winter, there are a number of specific rules and exceptions that you need to keep in mind when writing.

Do You Capitalize the Seasons of the Year?

While the days of the week and the months of the year are proper nouns and words that require capital letters, the seasons are considered common nouns and therefore follow the capitalization best practices that apply to all common nouns. The rule of thumb is that even when referring to a specific season, you should not capitalize the word.

Generally, nouns refer to a person, place, thing, or idea. A simple way to understand the difference between proper and common nouns is to think about it like this - the former is a specific example of the latter.

When given a specific name, a common noun becomes a proper name. Check out these examples:

Grammarly is a great proofreading tool for writers of all abilities. Not all writers are grammar experts. As such, we require our writers to use Grammarly when developing our SEO optimized content. Grammarly will help ensure that your content is on point and that your people adhere to all capitalization rules and exceptions.

4 Exceptions to the Rule

Rules sometimes need to be broken, and the capitalization rules for the seasons are no different. While the general rule states that you should not capitalize the season names, there are several exceptions to keep in mind when developing content.

Capitalize the Seasons When Personifying

You should capitalize the names of the seasons when you are personifying them.

Personification is a common literary tool typically used in poetry to assign the qualities of a person to something that isn't human (i.e., an animal, object, or abstract notion).

A great example is this passage from the poem "Sing To Me, Autumn" by Patricia L. Cisco:

"Kiss me, Autumn, with your enchanting spellbound ways."

"That changes all you touch into crimson golden days."

In this poem, the author capitalized Autumn because she is addressing the season as if it were a person. Although this exception is unaligned with conventional grammar, you will find that songs and poetry provide a degree of capitalization flexibility. When using personification, you can and should capitalize the seasons.

Capitalize Seasons as Part of a Proper Noun

You should capitalize a season when you are using it as part of a proper noun in your writing.

For example, while the season "summer" in most circumstances is considered a common noun, when using it to describe the upcoming winter Olympic games (i.e., a specific event during the season), it would be treated as proper and capitalized:

Another good illustration of this exception is the term "Winter Solstice." While the term uses the season name, the specific name refers to an official event that happens during the winter. As such, you will need to capitalize it.

Capitalize Seasons When Used in Titles

The third exception to our capitalization rule of thumb focuses on titles. When you use a season in a title, you should always capitalize it. An example would be the 2009 romantic comedy "500 Days of Summer." In this case, "summer" does not indicate the time of the year but is a part of the official and specific title of the movie.

We can use the movie to highlight and reinforce our second exception as well. In the film, one of the main characters is named "Summer Finn." Although a made-up character, the season "summer" is not referencing the name of a season but a proper name.

Therefore, you will always need to capitalize the season when discussing or mentioning this character.

Remember, an official title will always require that you use title case.

Capitalize Seasons To Start a Sentence or Question

Finally, you should always capitalize the first letter of the four seasons if they are the first word in a sentence. This is a general rule of grammar and not specific to the seasons. The first word at the beginning of a sentence will always need to start with a capital letter.

"Summer is my favorite season."

"He was chilled by Winter's icy breath."

To start a sentence:

"Fall is my least favorite season."

Knowing when to capitalize and when to use lower case is an essential tool in the young writer's toolbox. Most agree that you should not capitalize the names of the seasons in your writing unless the name you are using falls under one of the exceptions outlined above - personification, proper noun, used in a title, or to start a sentence.