Bear with Me or Bare with Me, Whichever You Prefer 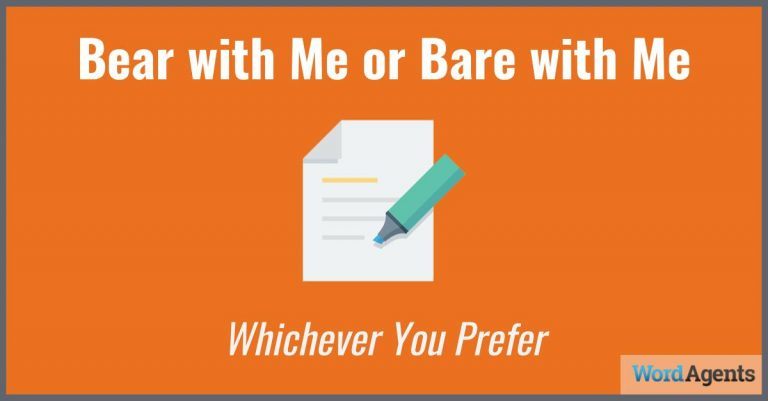 This grammar conundrum is one that you’ll want to avoid at all costs because of embarrassing this error is. It’s not uncommon to confuse the two whenever you’re dealing with homophones. These are pairs of words which sound the same but have radically different meanings. The greater the disparity, the more glaring is the error.

When you hear the word, bear, your first thought is undoubtedly of a burly animal that could make you history at the swipe of a paw. But the word has numerous practical uses as a verb that make it more formidable than a member of the Ursidae Family. Its meaning in this phrase means to support or endure.

You might bear with someone if they’re having unexpected difficulties or things aren’t going as planned. It’s a plea for patience and understanding that acknowledges your possible discomfort or inconvenience too. It’s an etiquette equivalent of “excuse me” or “pardon me.”

Uncovering the Meaning of Bare

While bear with me is a polite phrase in formal and informal speech, bare with me exists in the latter realm ... usually. Bare as an adjective means plain or naked. The verb means to reveal or uncover. It also implies something without the usual accompaniments such as a bare walls. You can also use it to mean something that is unconcealed as in a bare love of something

Why the Error Occurs

Probably one of the primary reasons that this error crops up is because of our first connotation with the word bear, however it’s spelled. We think of the animal and a noun first because that was likely your first encounter with this homophone when you first learned to read. But there’s also a historic reason behind the confusion.

An old now archaic use of the word, bare, was as the simple past tense of the word, bear. In older texts, you may see it used as a transitive verb with a subject. This former usage sounds awkward today.

The best way to avoid this error is to remember what bare means, namely, bare naked. The word, bear, is much more common in everyday usage and is the safer bet if you’re unsure. And bear is your way of supporting your own writing. Bear with me means be patient with me as a writer.