Should I Nevermind or Never Mind? 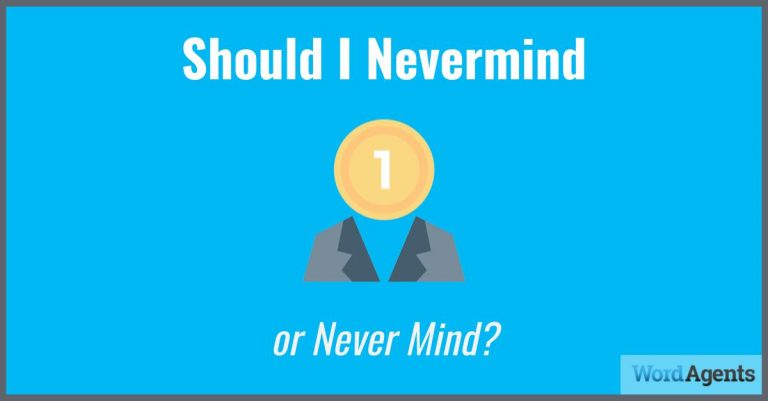 Whether you use nevermind or never mind depends on your type of writing and intended audience. Technically, both forms are correct. However, their meanings vary enough that you’ll want to know which is which. It’s also an interesting exploration of how words and phrases evolve in the English language.

Though the words are similar, their origins differ by about 140 years. That should alert you to the fact that there were some dramatic changes in the meanings over time. Both nevermind and never mind began with a phrase that sprang up in the late 1800s. Back then, you’d hear the phrase, “Never mind it,” as a gentle way to tell you not to fret over something.

When you hear the word, mind, you probably think of its meaning as a noun first. As a verb, mind means to pay attention, remember or be careful of something. Some of these uses are uncommon or obscure. One of the more common meanings is to obey. Looking back at the original phrase, “Never mind it,” you can see that it has changed through the years.

Eventually, the last word of the phrase fell out of use. Also, its meaning and context changed. Today, it carries a certain negativity that perhaps wasn’t part of its original intent. Saying “Never mind” to someone sometimes teeters on a snarky way to say that you don’t want to repeat yourself. But, it’s also shorthand for a change of mind.

It had acquired a new meaning in the 20th century. You’ll see it used to mean let alone or much less. Of the two ways to spell it, never mind as two words is more common today.

Historically, nevermind has two distinct meanings which often have negative connotations. It may mean attention or notice of something or someone. It could also refer to one’s business. You might see this word show up in older literature. The context would likely make its obscure meanings clear.

However, you probably won’t see it in modern day literature never mind common speech. Its use sounds awkward though its other meanings may come in handy for dialogue for the fiction writer. Unless you have a specific reason for using it, you may want to consider not using nevermind especially in formal writings. It isn’t as widely accepted today as it once was.

Using nevermind or never mind depends on context. For contemporary writing and speech, the use of never mind is preferable. Modern language uses the phrase as a verb which hearkens back to its etymology. Nevermind is still a good word for the fiction writer to keep in her back pocket. You never know when you’re going to have to tell someone that it’s not their nevermind.