To vs. Too: Getting It Right 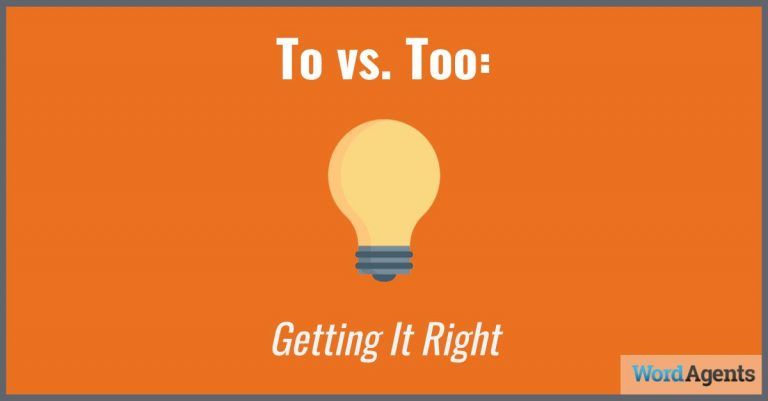 Homophones like to, too and two often present problems for writers, making it easy to choose the wrong one. The number, two, probably presents few issues since it’s spelled differently and is a number. To vs. too, however, are sometimes confused even though they aren’t the same parts of speech.

To is in the top five most used words in the English language. The top 25 account for about one-third of all printed materials. To also has the upper hand as part of the language, beating out too by several centuries. It was even used as a prefix during the Middle English period. This use survives in words such as today.

Part of the confusion of to vs. too may lie with the fact that to can express a lot of different things. These may suggest something in excess which follows with the definition of too. Among the things you can define are direction, degree, aim, state or desire. These functions may go hand-in-hand with a limit, so it’s easy to see why you may mix up the two words.

Too shares a common origin with to from the Old English word, tō. The difference came from the stress placed on the variant that suggests excessive. Too appeared in the English language at the end of the 16th century. Other meanings include in addition; beyond a limit; and extremely. It can also mean indeed or certainly.

Where to is a literary workhorse, too has a narrower scope. Too also delves into the realm of informal speech and even slang a bit more freely. Think of expressions such as “Too right” or “Too much.” It’s a useful word for placing added emphasis on a phrase.

It can be helpful to remember the most common meanings of to when it comes to distinguishing to vs. too. Definitions that might come to mind first may include its use to form an infinitive as in to see. You may also think of it in the sense of direction as go to the store. It’s easy to remember these cases that use to instead of too because it relies on its functional value.

To remember too, keep in mind its definition of excessive. Think that this is too much. You can also try substituting the word, also, for too in a sentence to see if it makes sense. That wouldn’t be too hard.