Do You Love Me Truely or Truly? 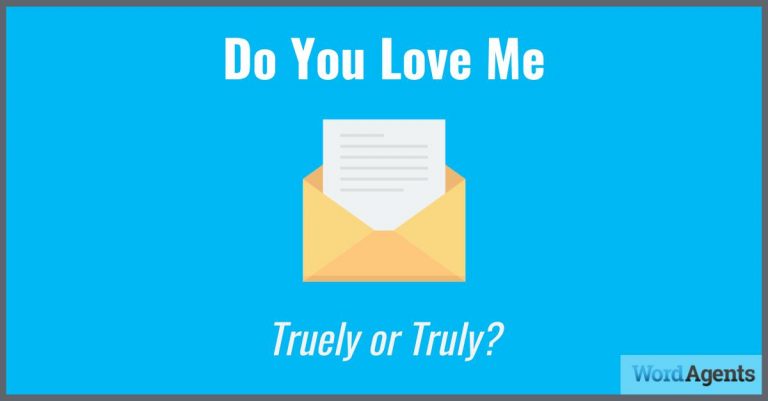 It’s easy to get confused over whether to use truely or truly. If you don’t use it a lot, you’ll likely fall back on words with similar construction to decide how to spell it. Words like nice may spring to mind. Nice goes to nicely with the simple addition of -ly at the end. So, doesn’t it follow that the same goes for true? Let’s find out why that doesn’t work for truly.

The short answer is that truly is the correct spelling when considering truely or truly. The fact that it ends with back-to-back vowels rather than the single one with nice should tip you off that it’s a different situation. However, truely is not so much an incorrect spelling as it is an archaic version of the right word that goes back hundreds of years.

Truly is an ancient word that goes back to the Old English from before 1000 AD. The English language went through several development periods. Words like truely reflect these older times. In some cases, what we call a misspelling today was actually the preferred one at another time in history. The Old English or Anglo-Saxon is the earliest version of the language.

This form had influences from Germanic tribes living in Europe at the time. The word, truly, comes from the Old English word, trēowlīce. It persisted until around 1066 when the language evolved in what is known now as Middle English. At this time, the early word for truly became treuli. If you look close, you can see where the truely version of the spelling developed.

The ‘E’ and ‘U’ exist side-by-side, albeit, transposed. You could make a case for truely at least being historically correct even if it isn’t an accepted spelling of the word today.

But there were also variations on that Middle English spelling too. There are references to it spelled as treuly in addition to truely. If you were running your spell check in the 15th century, you would have spelled it right. The correct spelling as we know it today came much later. Often when errors like this appear, you can trace the roots back to an archaic form of the word.

There were several major movements during the evolution of the English language that targeted specific letters and vowel groupings. Often, words lost silent or extraneous letters. Truly with an ‘E’ likely was pronounced the same, but the letter wasn’t necessary. And it’s certainly not an isolated case. The language evolved with many vowel shifts and mergers to Modern English.

English became more simplified during this period that ran until the end of the 15th century. Often, words like truely were shortened but continue to confuse both readers and writers to this day. If you’ve misspelled truly, perhaps you were just trying to get in touch with your Anglo-Saxon roots.